It's been a few years since we ran our last Untamed Africa Tour. This year we are going to witness one of the most exciting events on the African Calendar the Great Migration.

Nature’s oldest pilgrimage plays out on the endless plains of the Serengeti National Park and the Masai Mara National Reserve, as over a million wildebeest along with gazelle and zebra stragglers charge towards better grazing areas. This is the stage on which the 'greatest wildlife show on earth' plays out, as it is by far the greatest mass movement of land mammals on the entire globe. These mass ungulate herds cross plains and rivers as the seasons change and rain-ripened grasses are depleted in their area, forcing them to move on to the next.

The Great Migration has been listed as one of the Seven Natural Wonders of Africa.. Not only does it offer incredible views of the plains dotted with huge herds of wildebeest, zebra, and gazelle, but the rivers are often infested with large Nile crocodiles lying in wait. Some of the best safari opportunities in the world are found here, across a landscape made up of volcanic grasslands and vast plains interrupted by rocky outcrops, rivers, and forests. Visiting the right area in the right season will treat travelers to astonishing sightings of this natural phenomenon.

These migrational herds also attract the attention of some of the continent's most renowned predators, ensuring that if travellers are following the Migration; big cats, crocodiles, and hyenas will never be too far behind.

We will be following the migration through a number of Wild life parks during our Safari. We are also going to take in some of the other amazing sites East Africa has to offer.

Globe Totters have been running Safari's through Africa for over 11 years now and we are known for making Africa come alive. We don't work on the clock but rather on what experiences we can bring to our tours. Every tour is different and every tour group is different. 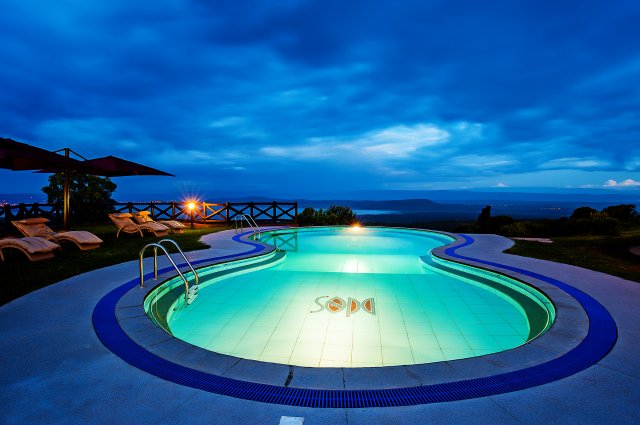 Our Lodge's - Your Safari Home

Kenya and Tanzania claim some of the world's most beautiful National Parks and Wildlife Conservation Areas which teem with countless species of birds and truly wild animals, and which also host our present family of seven – soon to be eight – Sopa  Lodges.  These have all been individually designed to compliment and blend in with the magnificent surroundings of their environments while reflecting the themes and influences of Equatorial African cultures and their art.

Large open-plan areas and cottage-style guest rooms nestle unobtrusively into the vastness of Africa, and are representative of the traditions of the local inhabitants who make up the rich tapestry of Kenya and Tanzania. The location of every facility at all our properties has been carefully chosen to promise the best views over the wilderness while also offering an unrivalled ambience amongst cool and elegant surroundings.